The Hoover Heritage • May 25, 2022 • https://thehooverheritage.com/1058/arts-leisure/the-science-enrichment-clubs-journey-to-carmel-beach/ 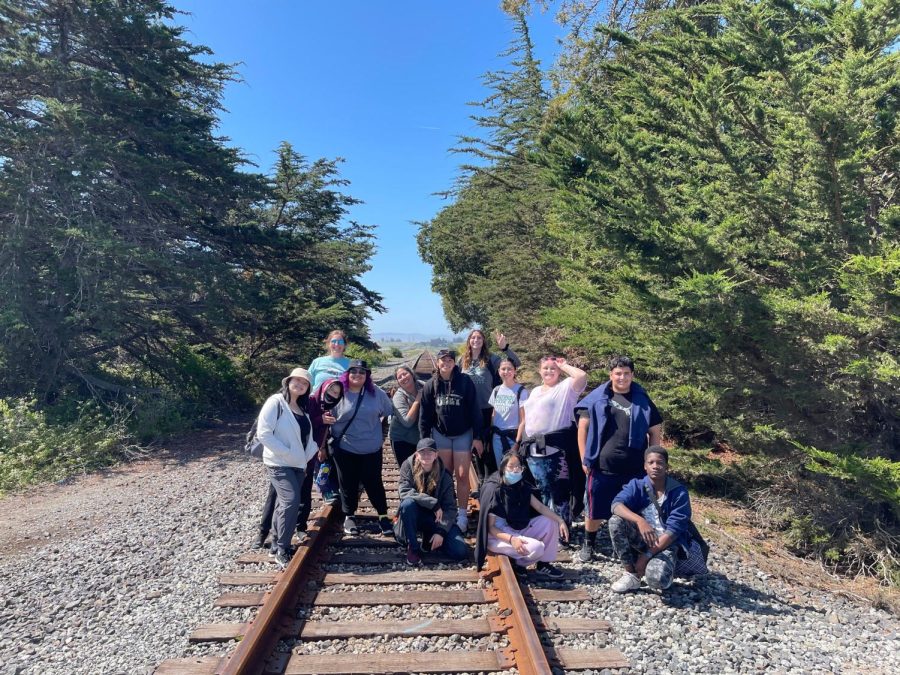 The Science Enrichment Club smiles for a group photo.

The Science Enrichment Club went on a field trip to Carmel Beach on the morning of Saturday, April 30th.

Members of the club met up at the Hoover parking lot around 5:40am to get ready for the road. They left the parking lot at 6:30am for the long trip.

Their first stop was at the Elkhorn Slough Reserve at 9:30am for a beautiful hike, going from the entrance to Hummingbird Island.

Along the way students stopped to view a few flowers, plants, and birds. One student even heard a wild turkey.

Going down the trail they walked up a bridge to find an orange, fungus-like plant growing alongside the banks of the river. While exploring, they passed by two different barns, old, dilapidated and falling apart.

Past the barns, the club crossed another bridge to make it to Hummingbird Island. They marched up large dirt and wooden steps to the very top of the island.

They found a beautiful place to sit for a while. Some students spotted a rabbit zooming past the trail and into the forest.

On the return journey. they found a structure of stones and clamshells. Then they took the long way back, taking a photo by the train tracks and having a sandwich lunch before leaving.

At 12:30pm they arrived at Monterey Beach to help with the research of sand crabs around the shore before that they met up with an instructor.

For the experiment, they started by dividing up into groups of teachers and students; each group at least had one teacher. One person in the group with one person who would use the core, a long tube with handles. The designated person plunged the core into the sand. When the core was at the right depth, another group member covered the little hole with his thumb and quickly pulled out the content of sand and organisms and lifted it to the group member with a mesh bag. Groups repeated the process until they had ten bags full of sand and organisms.

After this, they released all the sand crabs back to shore. Only two sand crabs were found, and the data will be used by scientists.

When finished, some students played in the water, others made sandcastles, and some found even more sand crabs the deeper they went into the water. When done they all got back into the vans and took a long drive to another beach.

The group went to Carmel Beach for a lovely afternoon at the shore, watching people run or play in the sand. One teacher brought a volleyball to play with. Some students had a nice time watching the water while some went around trying to find shells.

At 6:45pm it was time for everyone to meet up near the vans so kids could be dropped off and parents could drive them home.