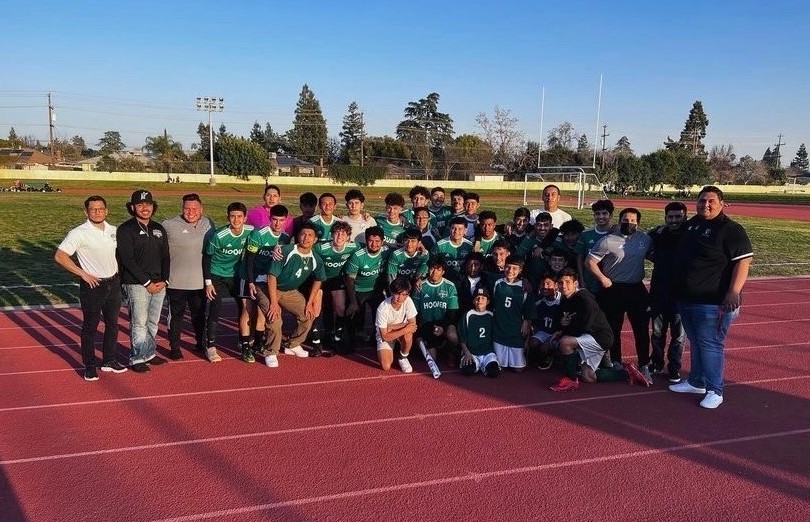 Hoover Boys' Soccer Team gather at the track for a group photo.

The Hoover boys’ soccer team fought a tough battle in their second game against Mclane February 1st at 5:00 on the varsity soccer field at Hoover High School. After the first hard fight the varsity boys had against Mclane on their field, they were determined to come back even harder than the last time.

When the first half started, Hoover had a shutout for the first 13 minutes until Mclane managed to score two goals back-to-back. This did not affect Hoover’s determination one bit. On a strong corner done by Adrian Rios, William Dixon took a chance and headed the ball in to make the score 2-1. Again, with a second corner William Dixon made another good header into the goal, bringing the score to 2-2.

After an intense first half during half-time the boys shouted fierce team chant, heightening their motivation to win the game. In the beginning of the second half Mclane scored another goal. Later, William Dixon tallied his third goal of the night, catching Hoover up.

The score was 4-3 when Mclane scored another goal towards the end of the game. In response, Ethaniel Adams took the ball up the field. As the goalie came out of the box, he drove a hard kick to the goal and scored, for a score of 5-4. The clock ticked and the tension rose until finally, the ref blew his whistle signaling the end of the game.

“We may have lost but it was a win in my book,” Dixon said after the game. Hoover accepted the score and moved onto the next game with another to reflect on.

“More discipline is what it takes for these guys to have more heart on the field,” Coach Avalos commented. They gave their all in the last game against Mclane of the season.