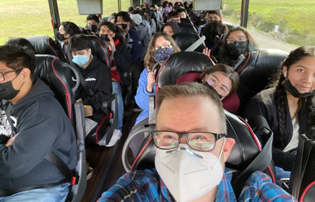 Mr. Nachtigall and students on the road to San Simeon.

On Tuesday, March 1st, Mr. Nachtigall, Mrs. Orozco, Ms. Paniagua, and Spanish translator Ms. Rodriguez accompanied the students of both the Zoology and Marine Biology classes on a field trip. Their first stop was on the coast at San Simeon. There they observed elephant seals in their natural habitat. Next, everyone had lunch at Morro Bay. They spotted sea otters while on a walk from town to Morro Rock.

Heading to Strand Beach, they dug up sand crabs and also found sand dollars and other seashells. Ultimately, the last educational stop was the tide pools in Cayucos. At 3:36pm, it was a very low tide at about –1.28ft. The students explored and found numerous sea creatures such as sea stars, sea anemones, sea urchins, and more. 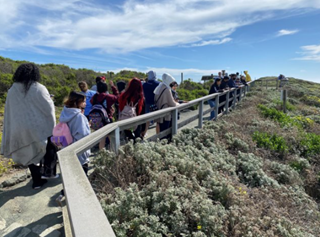 Gallery|7 Photos
Students walk up the dunes.
Leave a Comment